A Quick Look At Aboriginal History In Australia 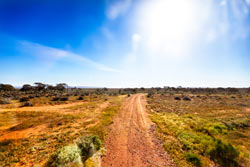 A Quick Look At Aboriginal History In Australia

The Aboriginal history of Australia was handed down from generation to generation in the form of stories, dances, legends and myths. Australia‘s history is the tale of how a featureless world was transformed into the magnificent country it is today. In the Sydney area alone, visitors can explore close to 5,000 Aboriginal sites, which stand as evidence of the times gone by and of the ways of life prior to the colonisation.

The first occupants of Australia

History records the first inhabitants of Australia along the foreshores of what is nowadays the Sydney harbour. For thousands of years, the Aboriginal people fished and hunted in the hinterlands and waters in the area. The different tribes that settled in the Sydney region harvested food from the surrounding bushes and they were self-sufficient.

Because food was found in abundance and they didn’t have to travel long distances to procure it, the first Aboriginal tribes lived in harmony with each other and even engaged in trading. Although they were forced to travel throughout the island in accordance to the season, they also spent a few hours a day working to ensure their survival. With all that free time on their hands, the Aboriginal tribes developed a rich spiritual life revolving around the idea of the man’s communion to the land.

The arrival of Europeans

The peaceful and harmonious lifestyle of the Aboriginal people came to an abrupt end with the arrival of Captain James Cook in 1770. As written records attests, Lieutenant Cook declared the land property of King George III, the ruler of Britain at the time, and called it the New South Wales. Lt. Cook didn’t even try to gain the consent of the local population and that the first acts of land ownership followed very shortly. 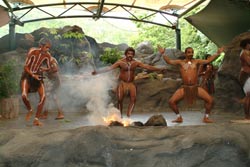 The colonization and the land’s transformation

Eight years after Lieutenant Cook’s arrival, Britain’s First Fleet under the command of Captain Arthur Phillip arrived to Australia with a precise mission: to transform the inhospitable land into a penal colony. Captain Phillip also had the assignment of taking control of the good land for building Britannic settlements. Neither he nor the numerous others that followed were in support of the Aboriginal ways of life.

Sadly, most of the Aboriginal inhabitants perished during the 1788 invasion along with all the stories of the land. What’s worst of all is that the ones who survived fell victim to the deadly viruses carried by convicts and sailors. All that is left now are vague myths and legends of these noble men. If you are interested in knowing more about the Aboriginal history in Australia, take time to visit the various attraction sites associated with it.

We can arrange transport for groups of any size to the Aboriginal sites in Perth such as the Kings Park, please call or send us an email for more information.