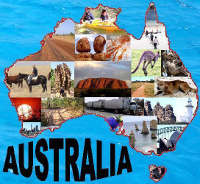 Australia is a huge country and is filled with delightful attractions. If you are planning a trip to Australia and you are not sure what to see and do, or if you are an Australian and you want to take a trip that you will never forget, take a look at some of the popular attractions listed below.

Australias Most Popular Buildings and Structures

The Sydney Harbour Bridge and Sydney Opera House are, by far, the most popular Australian sights visited by tourists every year. Climbing the bridge is a fun activity and a night at the opera is an unforgettable experience. You can take a walk around Circular Quay and ride a ferry to get plenty of snapshots of the two Aussie icons from various angles.

Some other popular buildings in Australia are:

Visit Some of Australias Gorgeous Beaches

Australia is the largest island in the world and as such, it has an expansive coastline. Australia is home to some of the most beautiful beaches and most popular surf spots in the world.

For sun, surf and sand right in Sydney, look no further than Bondi Beach. Many a film and TV programme has been filmed on this gorgeous beach and some of the best holiday moments can be experienced in Bondi.

Take a tour in one of the regions and sample award winning wines in breathtaking scenery. Wine tours make for a relaxing, fun-filled holiday and a bottle of Australian wine is the perfect souvenir to take back home.

Get Up Close and Personal With Aussie Wildlife

Australia is famous for its unique wildlife and some of the most popular attractions in Australia are wildlife zoos.

Steve Irwins Australia Zoo in Queensland is always very popular amongst tourists but if you are planning a holiday to Sydney or Melbourne, both cities have great zoos where you can pat and feed kangaroos and even cuddle koalas!

The sightseeing opportunities in Australia are endless. Whichever attractions you visit, you are sure to be pleased. Now all you have to do is decide where you want to go!