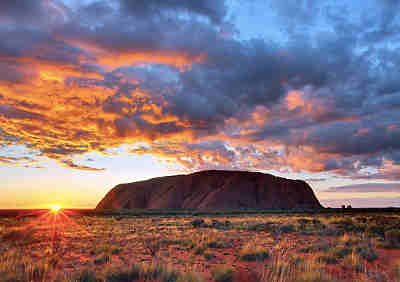 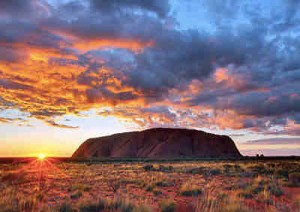 So much has been said and written about the Red Centre of Australia that it comes as a surprise  it really IS worth the journey.

Even the most jaded travellers gape open-jawed at the attractions of this region which is loosely centred on Alice Springs. But probably the highlight is to catch the sunrise as the light bounces off the iconic Ayers Rock (or Uluru, as it is nowadays better known).

A thousand shades of reds and yellows flood the senses and somehow render even the best cameras useless  though in any case it’s a sight that will never leave your mind.

Sunset in Broome with camel

Western Australia catches the sunsets, and one of the highlights is to see the sun go down over the Indian Ocean near the northern outpost of Broome.

The air is so clear in this remote region that the colours and lights sparkle like almost nowhere else. To make the experience even more memorable and exotic, try watching the sunset from the saddle of a camel â many operators organise camel walks along the endless sands of the beaches to the north of Broome. 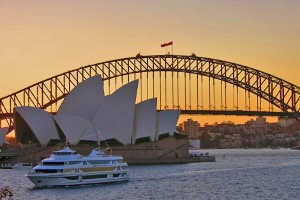 It’s not cheap, but a fantastic highlight of a visit to Sydney is a one-hour scenic flight that tales you over the Harbour and the endless inland bays of the Parramatta River.

One of the most famous of these trips uses a seaplane that takes off and lands in the harbour itself; some of the others use helicopters to enable you to see the Bridge and Opera House in detail from above. Unforgettable!

Of all the spectacular dive sites around the coast, perhaps the top draw is the Ningaloo Reef off WA’s central coast. This is 260km of the most astonishing variety of corals, fauna and underwater flora and there are organised dives for everyone from beginner to expert, s everyone can marvel at this unique natural heritage site.

It has been said that nowhere in the world is as sport-mad as Victoria, and is certainly shows when the AFL is in town. This incredibly athletic sport (‘footy’ to the locals) regularly draws record spectator numbers and the Grand Final each year at Melbourne Cricket Ground is a sell out with 110,000 people cramming into the ultra-modern stadium. It’s always hugely competitive but always with a good humour  it’s where you will hear true Aussie wit and the acerbic tongue for which Aussies have long been world-renowned.