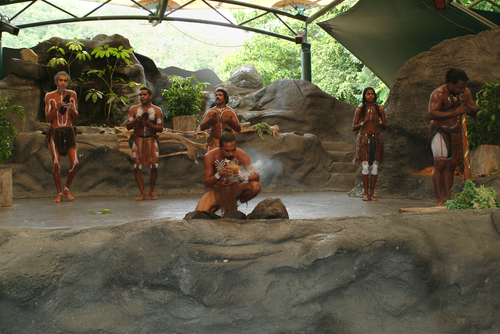 The area around Sydney is widely recognised as the homeland of the largest Aboriginal population in Australia. The Eora and Cadigal tribes were among the first people encountered by the First Fleet when it established its settlement at Botany Bay before moving north to what is now known as Sydney. Today it is easy to immerse yourself in the Aboriginal culture, because of the number and diversity of experiences available in and around Sydney as listed below: 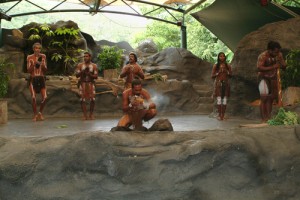 There’s the Tribal Warrior Cruise, hosted by an Aboriginal crew, around the harbour, landing on a small island to experience an authentic Aboriginal cultural performance. Learn about the way these people fished and how they ate, and their life before the white settlers arrived. If you are specially interested in fishing, there is a half-day experience teaching various aspects of Aboriginal culture including fishing, a bush-tucker tour, stories of the Dreamtime (a period revered by Aborigines when ancestral totemic spirit beings created the world, according to legend), boomerang throwing, and swimming.

A beautiful as well as instructive walking tour of the Botanical Gardens on the harbour-side will help you learn about the importance of this site to the Cadigal who originally inhabited this area. An Aboriginal guide will show you all about traditional use of plants, tools and weapons.

Don’t miss an opportunity to see the Bangarra Dance Theatre – Sydney’s own Indigenous performing arts company, which is famous for weaving traditional and modern cultures together in its award-winning dance theatre productions. Check ahead though, because Bangarra takes its art on tour for a large part of the calendar year.

At Australia’s National Maritime Museum at Darling Harbour, there is a permanent exhibition dedicated to the Eora, featuring their art (mainly paintings on tree-bark, but also featuring sculptures and other objects). At the Museum of Sydney, the history of Aboriginal culture is told through film and other modern interactive techniques.

The Nura Diya Aboriginal Wildlife tour at Mosman’s Taronga Zoo should not be missed. This takes the visitor on a journey through the zoo, a guide explaining how the animals, plants and humans in the region are interlinked and how important traditional medicine was. The entire tour was developed by Aboriginals themselves to show others how they link back to the Dreamtime.

There should be greater recognition today of the fact that the land around Sydney once belonged to Aboriginals, long before white people arrived. In the future, there will surely be more exhibits dedicated to their lifestyle to foster interest in the way the Aboriginal people lived then and now. If you want to experience the Aboriginal culture when visiting Sydney, you can book Sydney minibus charter with us and let us bring you on a tour where you will visit key points of interest comfortably in one of our modern vehicles.